Six of the Best

The wine I'm happily sipping today is Boutinot Les Six Cairanne and the name that sticks out for me is Les Six, The Six -- the newest handle for Toronto, the town where I live.

Said to be coined by uber-rapper Drake and inspired by our phone codes --- 416 and 647 -- The Six still falls short for those of us who prefer Hogtown. The likeliest origin, however, is the six boroughs that amalgamated into one city in 1998: Etobicoke, North York, Scarborough, York, East York and Toronto.

Fermentation in large well-seasoned oak vats before 12 months maturation in wood has allowed the elements to fuse seamlessly with berry-nutty aromas and a savory palate with just a touch of oak. It's an elegant Rhone red with plenty of richness.

Les Six is not currently at the LCBO, which, however, does offer another fine Boutinot Rhone-Villages -- Les Coteaux Schisteux, $25, from the nearby village of Seguret, peppery-spicy, plum-raspberry and bay leaf scented, quietly powerful with fine red meats and aged cheeses.

More of a Two, this one's mostly old-vine Grenache with a little Syrah, from a rugged, east-facing single vineyard called Les Turcs.

Erbamatta, the cool new super grape, still under the world's radar, may be the future for Italy's superb Franciacorta sparkling wines and for every other region staring down global warming

Franciacorta is Italy's reply to Champagne, under the radar itself. It’s tiny, just 2,000 hectares in Brescia, Lombardy, almost in Switzerland. 18 million bottles a year vs 350m in Champagne and 500m in Prosecco!

Straw-colored with a green tinge, Erbamatta is floral, chalky, earthy, lean and low in alcohol. The leading grower is Barone Pizzini with 4,000 vines, and others include Curbastro, Berlucchi, Ca’ del Bosco, Ferghettina, Vezzoli, Castello Bonomi and Ronco Calino have also planted the new variety.

Granted top-level DOCG status in 1995, Franciacorta is made as painstakingly as Champagne, in the individual bottles. Prosecco, meanwhile, has its simpler second fermentation in steel tanks.

Thought for the day: Charles de Gaulle famously said: How can you govern a country like France with its 365 kinds of (fiercely) local cheeses? Meanwhile, Italy, a long and narrow country, is 70% mountains, making it historically difficult just to travel from village to village, therefore massively local in its agriculture, producing as a result a mind-boggling 400 varieties of beans alone, thousands of wines, cheeses, and delicious cuisines, each fiercely proud and independent. Just sayin'.

Best Of The February 17 Release 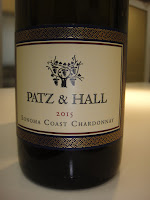 Coolest of all the cool-climate wines of the world is Chablis, bar none.  Vaucopins is the mini-terroir growing one of the best: Begue-Mathiot 2014, a flinty, austere and elegant premier cru that's well worth your attention.

It's $33 and just the fuse waiting for a platter of creamy seafood stew with all the shellfish ingredients you can muster. The razor-like acidity is the catalyst for a gustatory explosion.

The ancient limestone deposits bequeathed by primeval oceans have blessed us with intensely mineral wines delivered to us through 20-year-old Chardonnay vines. Bless 'em! Snag them on-line via lcbo.com

Likewise, on-line for the very different-style Chardonnay from Patz & Hall 2015 grown in California's Sonoma Coast. Upscale at $65, with half a forest of toasty new oak aging and full, rich ripeness of the Golden State. Some new leather notes among the Delicious apple, Anjou pear and Key lime complexity. 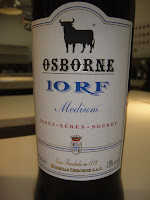 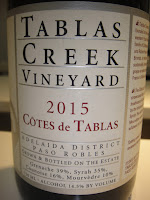 For 30 bucks, again on-line at lcbo.com, is a rich, reliable and more-ish red, Tablas Creek Cote de Tablas 2015. Grown in the Adelaida district of Paso Robles, it's a concentration of blackberries, new leather, raspberries, black cherries and a whiff of shoe polish. Stunningly good! 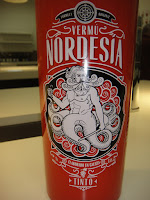 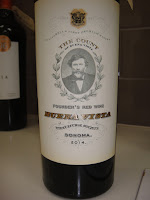 Taste a little California history in this bottle named for the founder of Buena Vista winery in Sonoma County: The Count Founders Red 2014. The patriarch was flamboyant adventurer, author, innovator, proto-capitalist and viticulturist Agoston Haraszthy. Hungarian-born, he imported European vines to California where ironically they died of the phylloxera virus that later killed Europe's own vineyards. This visionary pioneered premium winemaking in Cali, dug the first wine cellars, built the first winery of stone.
This Zinfandel blend, $17 in stores, is typical Cali: ultra-fruity, smoky, easy-drinking and great with any barbecue fare. 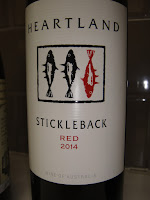 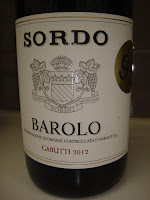 Speaking of Barolo, meet Sordo Gabutti 2012, a 100% Nebbiolo grape-based aristocrat to enjoy now or cellar for a decade. Sinewy is a good way to describe this mineral- leather, rare roast jus flavored work of art, $69 in stores, fair for a Barolo

There's wild strawberry, maraschino cherry, wild flowers and pipe tobacco, too. Paler red color intensity typical of the grape but it packs the power to give huge pleasure with the finest roast, steaks and stews.

Fun With The F-Words

They have fun with F-words making Fancy Farm Girl wines – Frivolous, Flamboyant, Fresh, even Frissonesque, as well as Vibrant, Opulent, Seductive and Sassy. All of which apply to the Fancy Farm Girl herself, Sue-Ann Staff, the talent behind the wines. 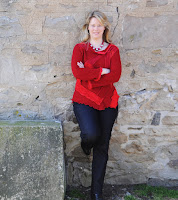 After enology studies at Guelph and Adelaide, she became Ontario Winemaker of the Year (first female, youngest ever) and short-listed for Top Women in Wine at the International Wine and Spirits Awards in London.

Whites like the 2015 Frivolous White sold in more than 270 LCBOs, a semi-dry 100% Riesling that has a marvellous Key lime acidity, the freshness of grapefruit zest and the cleansing feeling that’s a spa for your palate. $14.95. 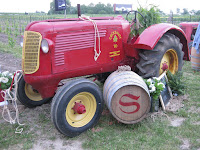 They are sold in the century-old farmhouse, online and LCBO, represented by Churchill Cellars.

www.fancyfarmgirl.ca; @Fancy_Farm_Girl, 905-562-1719 or you can fly in! This is Ontario's only winery with two grass strips for your single-engine airplane or helicopter.